At Camp, The Play’s The Thing! 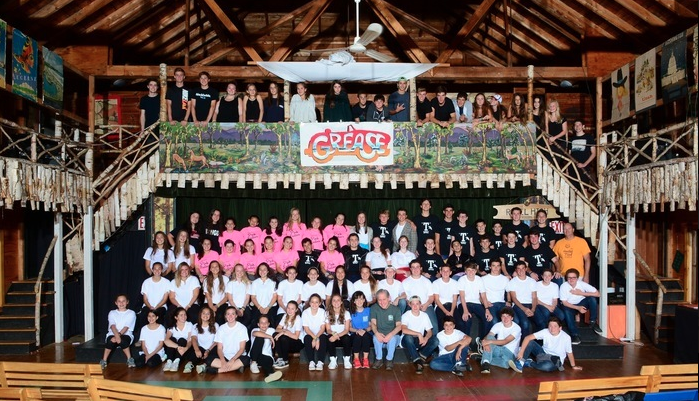 One of the biggest things that campers look forward to each year, is the Coed Play. While the final touches are still being added to the script, the Coed play to be performed during Parents’ Weekend this summer is going to be a mix of the old and new!

The very first Coed Play, Lil Abner, was performed in 1970 on the outdoor stage at Indian Acres. Since then, the plays have moved to the Tip Top stage at Forest Acres. Over the years, campers have performed in such shows as Guys and Dolls, Bugsy Malone, Grease, Annie, and plenty of other classics. At the helm of the Coed play is Andy “Ang” Cornblatt, who is returning to direct this summer’s show.

Bert and Ang working out details for the play!

Our oldest campers this year have the opportunity to perform in a combined show called Give My Regards to Broadway! The musical features some classic oldies found on the jukebox and a few standards that you’ll probably recognize. Get ready for some catchy tunes and some hits from the “King of Rock & Roll!”

There are always more performance opportunities at camp! Aside from the Coed Play, there are opportunities for our younger campers to get onstage. Whether it’s music, dance, or drama, there are plenty of ways for campers to perform.  This year at Forest Acres, the junior campers are performing A Year with Frog & Toad. This silly musical follows two best friends – Frog & Toad – as they go through the four seasons and celebrate what makes an individual special. Intermediate campers at Forest Acres are performing Dear Edwina, Jr. – all about a young teenage girl who’s dishing out advice to all of the neighborhood kids.

Drama is just one of the many activities that our campers have the opportunity to try over the summer. Over Parents’ Weekend, this is just one of the ways you can check out what your camper has been up to while they are at camp. Campers get so excited to show off what they’ve been working on and we hope you’ll check it out while you visit camp this year!